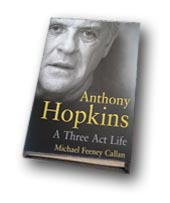 Welsh-born actor, and now American citizen, Anthony Hopkins is locked into the public imagination as either an anally retentive, emotionally repressed Englishman unable to hurt a fly (the butler in the 1993 film The Remains of the Day, or as CS Lewis in Shadowlands, made in that same year) or else as the horrific psychopath Hannibal Lector, in the 1991 film The Silence of the Lambs.

But in a career lasting over half a century, he has played a leading role in over 90 films and major theatrical productions, where he has brought many of the his unique characteristics to bear.

Hopkins’ talent as an actor is to make his audience become emotionally involved with his characters, while at the same time not fully liking them. Irish-born Michael Feeney Callan’s task as a biographer is slightly similar, in that the highly driven but insecure man who comes across in the book is never especially likeable.

Hopkins is amenable, presentable, intelligent and well mannered, but step over into his private life, and the shutters come down and stay down. Callan presents him as a man carrying ghosts as he constantly drives himself forward.

Rather like the characters he is fond of playing, Hopkins has always been something of a misfit, standing – as the Greek poet Cavafy phrased it – at a peculiar angle to the universe.

Like Athlone’s John Broderick, he was born a baker’s son in a small town, and was acutely aware of that social position. Classmates from various boarding schools recall him with no particular affection, while teachers recall being frustrated at this deliberate refusal to engage in sport or even drama – indeed, any activity that might draw him into the herd. Cinema was his fantasy, and acting was to prove his way out. Although, long before film, Hopkins made slow progress through acting school and toured small venues in Wales with the Raymond Edwards group, while people – most especially himself – predicted great things for him.

Hopkins told his fellow cast members that he had been invited to join the National Theatre in London, and became caught up in this lie until he was forced to admit that the call hadn’t come.

However, when Laurence Olivier began to restructure the theatre, appointing radical theatre critic Kenneth Tynan as literary manager, he sought out new talent. He quickly recognised Hopkins’ ability and the Welsh actor became central in the rejuvenated theatre.

Callan’s book is especially good in tracing the leap that Hopkins made out of theatre, turning his back firmly on Olivier once the chance arose to break through into film.

The base for his first film (The Lion in Winter, made in 1968 with Peter O’Toole and Katherine Hepburn, which was filmed in Ardmore Studios in Wicklow) was hardly glamorous. While O’Toole raised hell in Dublin and Hepburn took a romantic cottage nearby, Hopkins and the rest of the cast and crew were holed up in the Glenview Hotel.

Hopkins was nervous, with Hepburn guiding him through scenes, making him turn more to the camera. He embraced the new medium, acting in a host of lesser films during a period of his life that saw his marriage break up and many of the demons of his introversion come to the fore.

He entered a lunatic spiral of manic heavy drinking that, in the actor’s own words, saw him ”standing on the brink of hell… driving over the canyons, blacking out, not knowing where I was going. In the mornings I would wonder did I kill somebody? And would check the front of the car.” When the chance to move to America came, he leapt at it, taking any work he could get, avoiding the English set in Hollywood and drinking in bars alone. What Hollywood really wanted from him was a new Richard Burton. Film by film, Callan painstakingly pieces together Hopkins’ slow path through 20 anguished years to gain universal acclaim as an actor.

A Three-Act Life brings us right up to 2005 in Hopkins’ complex life, and yet the actor remains a sketchy figure, someone who you still don’t quite know, or even want to know. This could be the great chameleon quality of the reserved schoolboy who only came alive among his peers when he gave perfect impersonations of every teacher.

As an actor, Hopkins has eclipsed the talent of his idol Richard Burton, although one suspects that Burton, for all his own demons, remained the happier man.

This is an impressive work by one of Ireland’s foremost biographers.

“This is a serious book … shrewd, detailed, comprehensive” – the Irish Independent

“Meaty .. Callan traces his subjects rebirth, one that led to his present status as one of Britain’s great post-war actors” – the Independent, London

“Vividly portrays a hell-raiser tortured by his own demons” – Michael Arditti, the Times